When the Death Guard models were released this year, we were very critical of them. Although released alongside the Primaris Space Marines, they did not benefit from the improved anatomy that the new Imperial warriors did. Despite their increase in size, the Death Guard models still suffer from unsightly thigh gaps and have precious little in the way of abdomens. Instead of simply complaining about Games Workshop’s questionable design decisions, with encouragement from bigbossredskullz, we decided that we would try our hands at correcting the Death Guard’s anatomical issues. Rather than just doing this ourselves, we proposed a challenge, encouraging anyone interested to convert some Death Guard models that would live up to the legion’s despotic legacy. To our delight, nine talented hobbyists took up the challenge and created some of the finest Death Guard models you will ever have the pleasure of seeing! Below, in no particular order, we showcase their fantastic work.

Terminator armor is one of the most iconic elements of Space Marine/Chaos Space Marine imagery, but it is also one of the most flawed, exacerbating many of the issues of traditional power armor (particularly with the positioning of the arms up by the the model’s ears). Unfortunately, even though two separate terminator kits were released for the Death Guard, none of them improved their awkward proportions. Florian Gand took up the prodigious task of trying to rectify these issues and quite possibly created the best terminator model we have ever had the pleasure of seeing. He expertly spliced together a host of kits, supplementing them with plasticard and green stuff, to create a model entirely his own, but one that is unequivocally Death Guard. With a single model, he was able to show that sensible anatomy can work alongside the hunched, bulky shouldered design of terminator armor if some small changes are made. Games Workshop should take note. 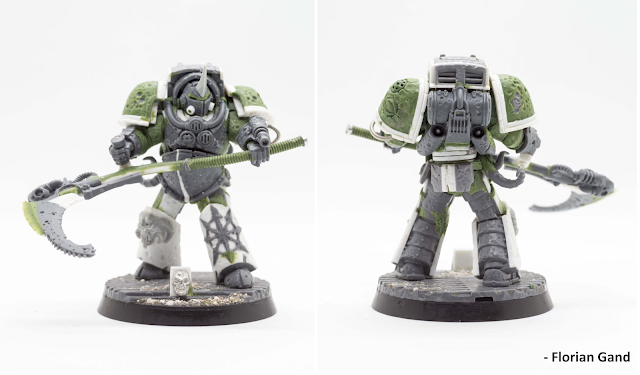 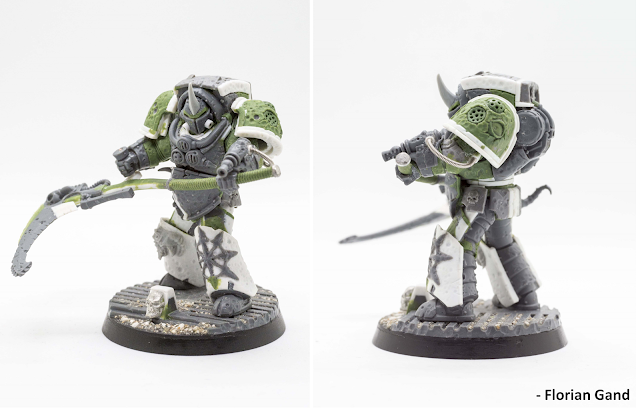 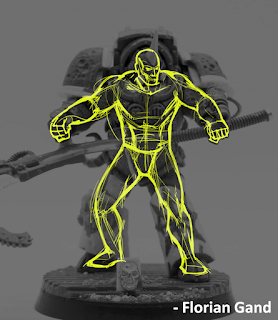 
Ibola Malarex is a vile creation from the talented Paul-Friedrich von Bargen, who runs an excellent blog Fummelfinger. Recognizing the improved proportions of the Primaris legs, he saw a way of creating a better Death Guard model. By combining these legs with some plastic Tartaros terminator parts and milliput, he was able to create a remarkable patron of Father Nurgle. Instead of resorting to tentacles and horns, he captured the essence of Nurgle with texture, which he created by drilling and cutting out gouges in his armor, as well as using glue and water effects. His weapons are also simple and battered, functional but not much more, rusted and pockmarked. Each aspect of the the model is pulled together expertly with a worn and dirty paint scheme that makes it clear that he is a virulent hive of decay. 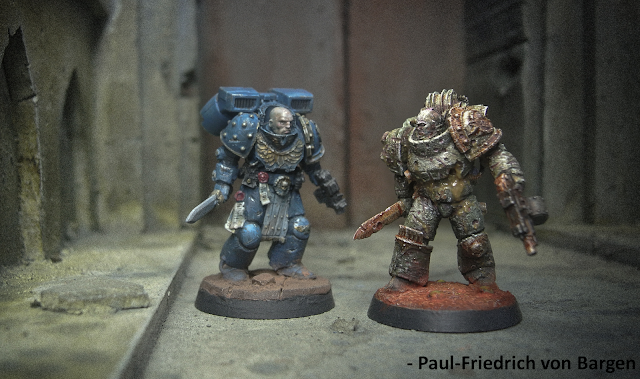 
One might wonder how the Dark Imperium Death Guard models would look if you kept the modifications to a minimum, only correcting their most grievous problems. Luckily, Tom Tokley, who you may know from his excellent Ammobunker thread, did exactly this! It is quite remarkable how much better the models look with just some spacers added to lengthen their torsos, emphasizing the talent that went into the original sculpts, but also how such oversights can really belittle a model. He did not limit himself to just adding spacers, however, and created quite a few other great models with carefully-considered kitbashes. 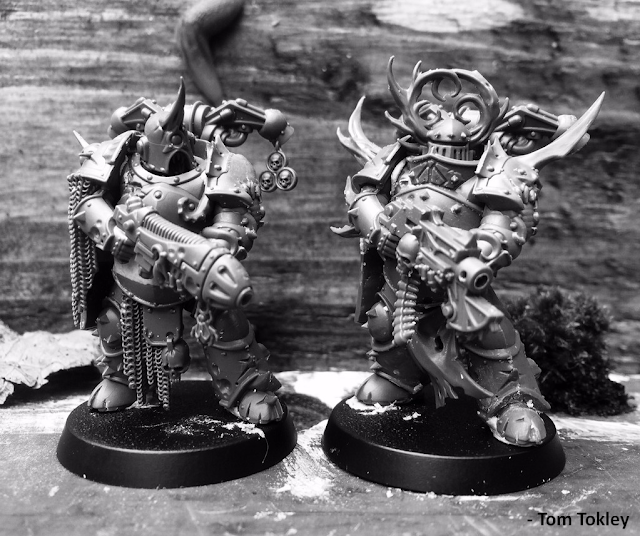 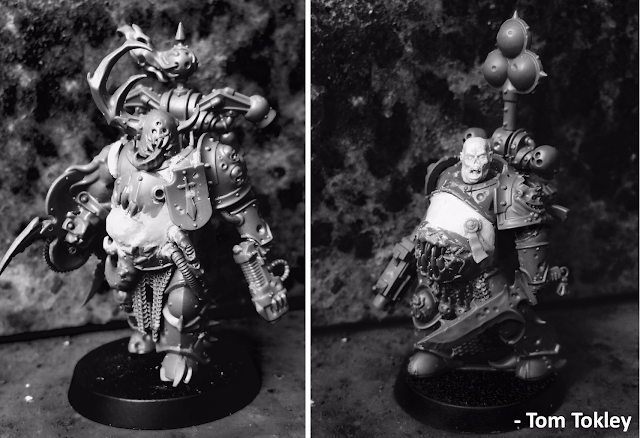 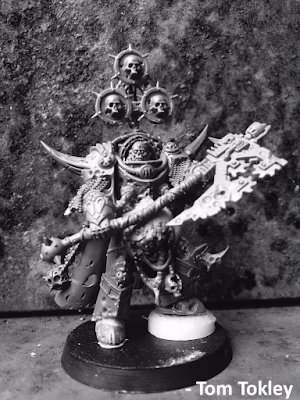 For this Challenge, Andrew Rae, an extremely talented sculptor and creator of Statuesque Miniatures, put his efforts towards improving the Plague Surgeon character model. Upon close inspection, he realized that the model did not suffer from as many anatomical issues as many of the others, with his legs and torso quite similar to that of the Primaris Space Marines. Despite this, the model still looks a little awkward, which he attributed to how low the model’s head is seated. With this in mind, he lopped off the original and replaced it with a new head that he made sure was raised higher. The result is stunning; the slight elevation of the head makes the rest of the proportions fall into place. The head he selected (from a Primaris Aggressor) is excellent, and posed perfectly, effortlessly telling the story of a proud and noble warrior, standing against his doomed fate, unwilling to admit defeat.


Of all the models in the new Warhammer 40,000 boxed game, the Malignant Plaguecaster is arguably the worst, with an odd pose and a terrible baby-like face. Tony Rask, or regni.tenebrarvm on Instagram, resolved to convert this lackluster model into something more befitting of the Death Guard. After a lot of hacking, reposing, and part substitutions, he achieved his goal, so much so that one would be hard pressed to recognized it was based on the same model. By removing a lot of the bloated mutations and horns, he was able to focus on the better elements of the base model, while replacing some of the worst elements. He changed the head to a more fitting MKIII helmet and gave him a phobos pattern bolt pistol, as well. The model does a great job of showing how simply toning down the original models with other established elements of GW’s IP can create much more pleasing models.


Evan Hough took the approach of lengthening the torso and legs to bring out the hidden strength of one of the Death Guard models contained in the First Strike boxed set. This simple modification does so much to strengthen the model, eliminating the hunched, bulbous look of the original, as well as making his grenade launcher seem more appropriately sized. He did not stop here, however, and also created a murderously tall Death Guard Lord based on the one included in the Dark Imperium boxed set. The resulting model looks nothing like the one in the set, due to the skillful splicing together of all manner of plastic kits, including using a piece of Scout armor to help create his torso. The model has an excellent brooding pose that is strengthened immensely by the awesome rhino-horned helmet. 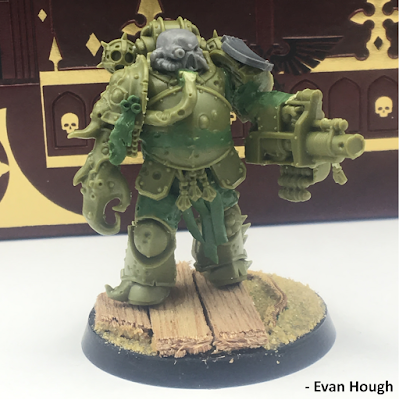 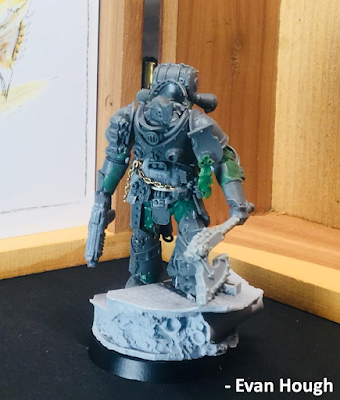 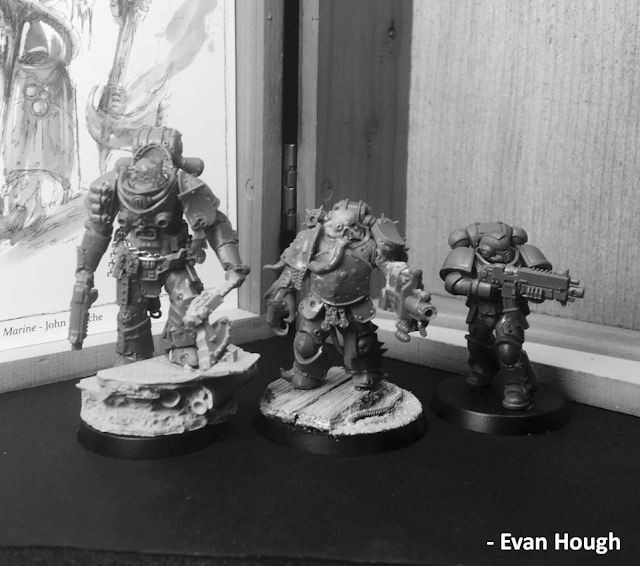 
One criticism often leveled at the new Death Guard models is that they are incredibly overwrought with detail and gaudy mutations. Thomas Fordal tackled this issue, as well as the anatomy concerns, when building his Death Guard. Many of his models eschewed the new Death Guard models entirely in favor of a wide selection of different kits, including Primaris Space Marines, the Putrid Blightkings, MKIII Iron Armor, and even Stormcast Eternals! He experty crafts all of these elements together into an incredibly cohesive whole, looking like battered crusaders at the height of the Horus Heresy. A drab and dusty paint scheme, along with rough and rusted weapons, fits the models perfectly, elevating the models to somber, silent warriors; creeping death inexhaustible. 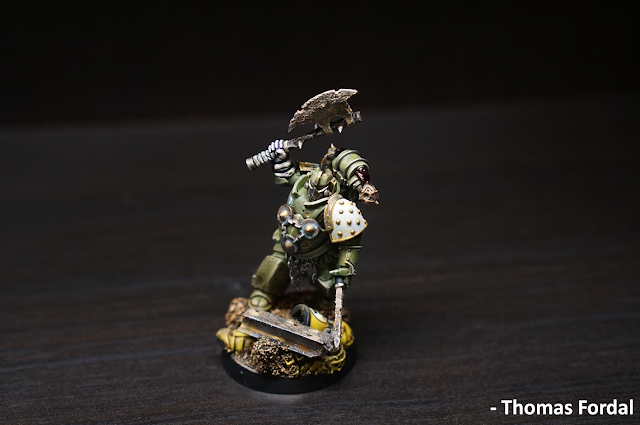 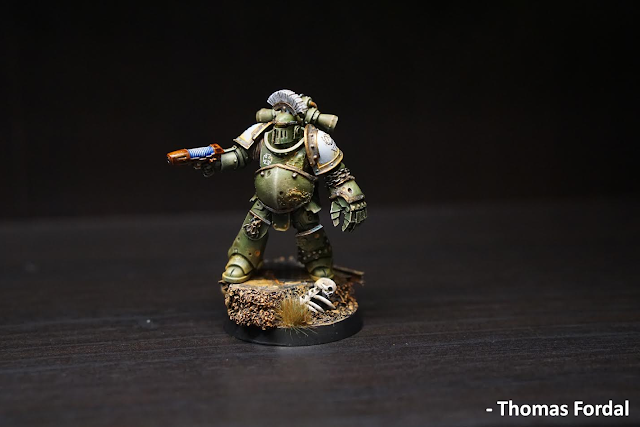 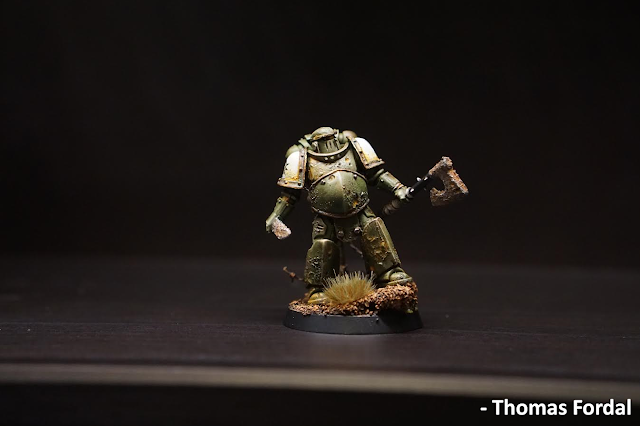 When it comes to visionary conversions, particularly those not restricted to the tropes of Warhammer 40k, few can match the Polysmith. Although he tends to convert all manner of fantastical robots and other automatons, he decided to try his hand at creating a Death Guard marine. He took one of the weakest of the new models, a Sergeant from the First Strike boxed set, and made him utterly terrifying. Using liberal amounts of green stuff, he completely resculpted the model’s thighs and the majority of his torso, making him absolutely massive and suitably imposing. He also replaced his plague knife with a bloated and corrupted hand that was beautifully textured with leaves and other light foliage. The model is further strengthened by a simple paint scheme of of blue-grey and green tones, all weathered superbly, making the model look absolutely ancient. 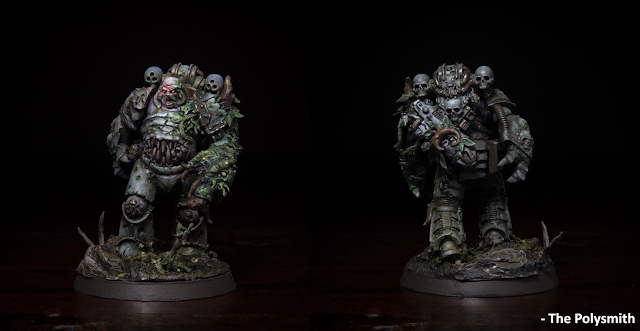 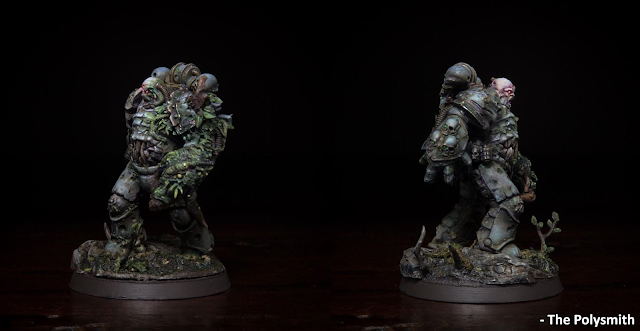 
We have to thank our friend Bigbossredskullz for helping us formulate this Challenge and encouraging us along the way. Never one to let a modeling challenge pass him by, he created some stunning Death Guard for this event. Rather than using the new Dark Imperium models as a basis for his conversions, he instead used the far nicer Putrid Blightkings. With this said, you might be hard pressed to even recognize the Blightking pieces, such is the extent of green stuff he used to fully realize his creations. The end result are some massive looking Sons of Nurgle, each with a bloated sense of simplicity, not crowded with mutations. It is particularly refreshing to see some 40k models where their weapons are a reasonable size, not overshadowing the characters themselves. 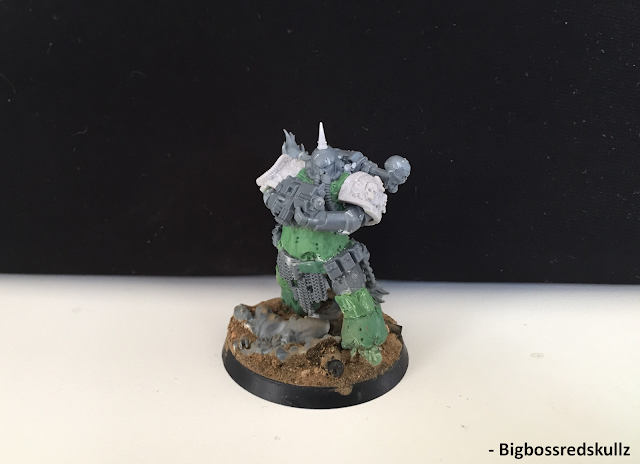 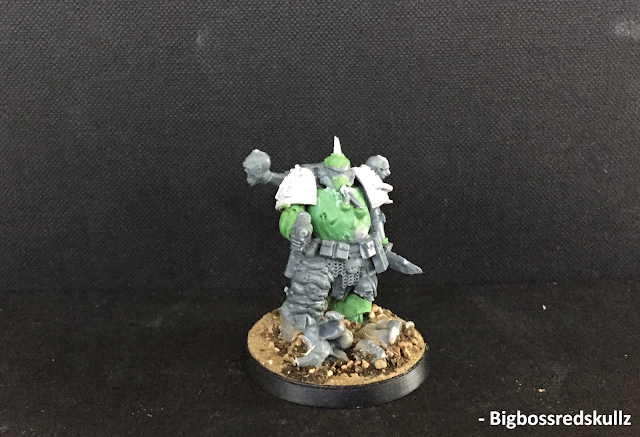 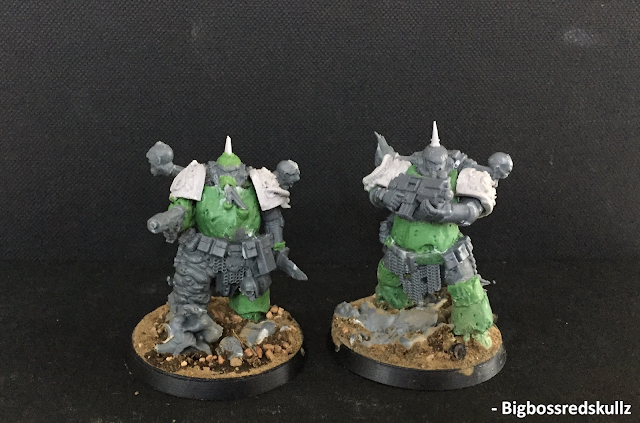 Well there you have it, nine incredible hobbyists’ take on what the Death Guard should be! We think they are some of the best looking Death Guard models you will see anywhere on the internet, and better reflect the Death Guard imagery that has been created over many years. We are so grateful for all those that participated and made this Challenge a success. All of the entries provided us with constant motivation to create our own Death guard model, and will be certain to inspire countless people in the future. And although this event may be over, we encourage anyone interested to try their hands at creating better Death Guard and send pictures of the results to us, as we would love to feature more in the future!